ADX- Giving Makers a Space of Their Own, Interview with founder Kelly Roy 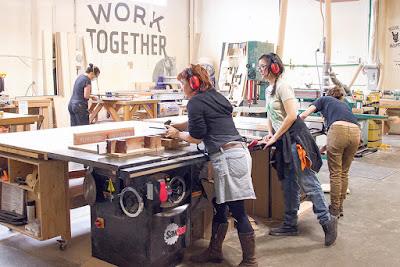 I was very impressed with this facility when I toured it with the Oregon Econmic Development Associaton a couple years ago! This interview with founder Kelley Roy gives insite into what inspired her to turn a warehouse into a creative space for Portland's makers.


ADX IS A COLLABORATIVE MAKERSPACE AND FABRICATION HOUSE WHERE INDIVIDUALS AND ORGANIZATIONS MAKE AND LEARN. BY SHARING TOOLS, KNOWLEDGE, SPACE, AND EXPERIENCE, WE’RE DOING THINGS BETTER BY WORKING TOGETHER. http://adxportland.com/about/

ADX founder Kelley Roy on giving makers a space of their own
Kelley Roy founded ADX in 2011 as a space where makers could explore the possibility of making a living by practicing their craft.
Dec 15, 2016, 12:29pm PST Updated Dec 16, 2016, 2:59pm PST

Title: Owner and founder, ADX and Portland Made
What: ADX is a cooperative tool warehouse in inner Southeast Portland. Members can use the tools and take classes. ADX also has an in-house manufacturing arm that takes orders. It also serves as an incubator for young manufacturing and apparel companies. Portland Made is a digital storytelling platform for Portland’s makers.
Education: Bachelor’s degree in geology, graduate degree in urban planning.
Fun fact: Roy co-authored “Cartopia,” a book about Portland’s food cart scene. She also wrote “Portland Made,” a book about the city’s makers movement.
Another fun fact: Roy competed as an equestrian as a kid.


T he woodworkers and welders at ADX constantly create new products. The executive behind the maker space is as creative, just not with a blowtorch and wood lathe. Kelley Roy founded ADX in 2011 as a home for the city’s legions of carpenters and woodworkers. She hasn’t stopped tinkering since. ADX recently opened a retail store. This year she partnered with the Portland Apparel Lab to tap into the city’s robust population of fashion entrepreneurs. She’s also adding a more dedicated incubator space for entrepreneurs and trying to stockpile warehouse space in order to keep a commercial real estate pipeline open for the next generation of manufacturing companies. The Business Journal caught up with Roy by phone this week. Questions and comments have been edited for brevity and clarity.

How did you get involved in the maker movement?

It was a bit of an accident, like all great things in life. My academic background is geology and urban planning. I wanted to go to art school. That was not a practical route, according to my parents. The only companies that came courting (after I got a geology degree) were oil companies. I didn’t have any dreams of working for an oil company. I wanted to be a National Geographic photographer and fly around the world scaling volcanoes and taking beautiful photographs. But I’ve always been surrounded by artists and I just have a huge appreciation for the creative process because it’s not something that comes naturally to me.

I studied neighborhoods and integrating design and urban planning and master planning and green infrastructure. It was connecting the dots and working with communities and bringing a lot of different things together.
What was the basic idea behind ADX? ADX was founded with the idea of what if you could make a living as an artist or a designer or a maker? Some people aren’t really doing their craft or their art to make a business. Giving people a place to explore it saves them a lot of time and money and heartache.

How’d the idea come together?

In July 2010, I read an article in The New York Times about a place called the 3rd Ward in Brooklyn. It’s no longer around. They had been operating for about five years at the time. It was basically an ADX-like space. It had a big warehouse filled with tools. They had classes. They did events. They had members. It sounded like something Portland would like. When I started looking around, there were a lot of collectives, like woodworkers who work together and share tools, but they were all kind of the same discipline. What I was really curious about is if you provided the space and tools could you get people from all these different disciplines to work alongside each other.
How did you finance ADX? It seems like it would be hard to convince a bank to give somebody cash to buy a warehouse filled with tools. I was super scrappy about it. You can’t be blowing money. You’ve gotta be resourceful. I had a couple folks who believed in me. They saw the potential for it being an economic engine. I had to put everything on the line.

What have been some of the missteps?

About a year and a half ago, I basically opened the books to employees and said, OK, let’s look at this. I was trusting my staff and my people to look at the books and look at how the business operates and help me run it. I had lost a couple general managers. Something had to change. They have all stepped up to the plate. They had to learn a lot. Financial literacy in our culture in general is pretty poor. That was probably the scariest, but it turned out to be the smartest.

Why is Portland the hub of the makers movement?

We had a lot of affordable warehouse space close to the city. That’s what allowed it to really flourish in the city itself. The industrial areas are close to where people live and other companies are located. And you just have this spirit in Portland. There’s this pioneering, entrepreneurial, independent, I’m going to do-it-better attitude and this spirit of community and collaboration. Combined those three things create this perfect storm.
That affordable real estate is quickly disappearing. How will the maker movement deal with that? We just launched something called the Industrial Grange. It’s a preservation move. It’s saying, what existing property owners are out there who want to preserve and protect their buildings for makers and how can we work with them to make sure their buildings stay full?

Why did you say no to a visit with President Obama?

I still believe in American manufacturing. It does look different and it would behoove politicians at any level to understand what this new face of manufacturing looks like. I would love to do more tours of spaces with elected officials at every level of government to show them what this looks like. I think we are going to get some manufacturing coming back to the U.S. that’s moved overseas because there’s a lot of issues with production overseas. I would make the same decision again. It gave me a voice and a platform from which to explain what I see.

What if Trump calls?

He wants to bring manufacturing jobs back. I’m not sure he would be welcome in Portland. I don’t know if Portland would have him. If he was able to make it into Portland, just like Obama or any other elected official, I would love to show him what’s happening on the ground.