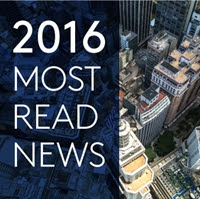 Read the news that most interested the commercial real estate broker community in 2016.

CoStar is the most comprehensive provider of information, analytics and marketing services to the commercial real estate industry for the Portland Metropolitan Area. It is also the most relied commercial search engine in the US and UK.  Our commercial team is fortunate to have a local representative meet with us weekly for individualized tutorials for using the analytics.


For all its ups and downs, U.S. commercial real estate enjoyed another banner year in 2016, thanks in large part to the unprecedented run in multifamily rents and property values and the fact that the U.S. continues to be viewed as a 'safe haven' by global property investors.
But it was also marked by continued distress in the retail property sector as the 'creative destruction' forces unleashed by Amazon and other internet retailers continued their inexorable impact on traditional bricks-and-mortar stores.


Here is the news reported by CoStar that you, our readers, considered to be the most interesting and newsworthy in 2016:

Changes at the top always garner the most interest among our core CRE readers and 2016 was no exception. Beginning with Marcus & Millichap in March, to Cushman & Wakefield, followed by CBRE in June, JLL in August and Cushman & Wakefield just last October, all made several major changes to their senior leadership lineup during the year:
Nadji to Succeed Retiring Kerin as President, CEO at Marcus & Millichap
Lafitte and Frese Elevated to New Global Group President Positions at CBRE
JLL Implements Leadership Succession Plan: Ulbrich to Succeed Retiring Dyer as Global CRE Firm's Chief Exec
Cushman & Wakefield Realigns Leadership Roles for Top U.S. Execs

The news that Macy's plans to close another 100 stores caught many by surprise. The move raised a red flag among already-jittery mall investors and signalled a much-more aggressive stance by Macy's CEO Terry J. Lundgren to pursue strategies to unlock more value from the department store chain's real estate.

CoStar's real estate audience was also very interested in the intrigue over a California court case involving the legal implications of 'dual agency' representation in that state. In a decision with potentially far-reaching impact on how commercial and residential real estate brokerages do business, the California Supreme Court upheld a lower court ruling that a listing broker had a fiduciary responsibility to both the buyer and the seller in a "dual agency" transaction.

The surprise election win of real estate developer and reality television star Donald Trump as the next U.S. president set off a bit of a scramble among business leaders grappling with the unexpected economic and regulatory impact of an upcoming Trump presidency. However, the shock of the unexpected election results were quickly replaced by the realization that the same party now controls Congress and the executive branch. The industry is poised to monitor the election's impact in the year ahead with significant changes expected to the tax code as well as U.S. trade policy and rollbacks in the nation’s financial and business regulatory framework.

The news of Hines' decision to cash out two of its sponsored REITs and lock-in returns at current property valuations was seen by many as a sign that commercial property markets may be approaching their peak. Hines later went on to strike several major deals with other investors to sell of its holdings. Hines was joined by KBS and NorthStar Realty in putting large portfolios on the block even as a large number of publicly traded REITs including Liberty Property Trust, Kimco and others wound down their aggressive property disposition strategies.

Throughout 2016, there was a pitched battle between bank regulators calling for stricter underwriting standards for CRE loans, and lenders competing for business in an increasingly competitive real estate lending environment. Despite federal banking regulators putting banks on notice that they were going to be taking a closer look at CRE loan concentrations, banks continued to pump up their CRE lending, buoyed by continued strong property fundamentals, much to the chagrin of regulators. Stay tuned for CoStar's continued coverage of this important topic in 2017.

JLL's plan to add a robust valuation and advisory services business line to match its competitors emerged as the top real estate M&A story line in 2016, with more dominoes expected to fall in this sector in 2017. Insiders widely expect other IRR affiliates to be acquired by larger companies in coming weeks or months. Other M&A news capturing a lot of interest in 2017 included Cushman & Wakefield's acquisitions of Taylor & Mathis in Florida and Atlanta-based Multi Housing Advisors to expand its market share in fast-growing southeastern markets, and Newmark Grubb Knight Frank's bid to add top talent in key markets.

In a surprising move that could radically reshape the beleagured non-traded REIT industry, the $100 billion behemoth that is Blackstone Real Estate announced plans to launch its first-ever non-traded REIT, seeking to introduce new fee structures and lend its considerable heft to the once-mighty real-estate capital-raising sector.

9. Internet Commerce Drives Strongest Surge in Demand for US Industrial Space Since 2001

Typically outshone by the multifamily and office sectors, warehouse and distribution property saw a lot of the investment and leasing action in 2016. Among the many blockbuster deals, Global Logistic Properties Ltd. agreed to buy a 15-million-square-foot logistics portfolio from Hillwood Development Co. to solidify the Singapore-based company's position as the second-largest owner of industrial property real estate in the U.S. That was followed one week later by Blackstone Group was jumping back into the industrial property space with an agreement to buy 46 logistics properties totaling over 26 million square feet from LBA Realty for a reported $1.5 billion.
"All in all, the last six months have been the best in our company’s history," said Hamid Moghadam, chairman and CEO of San Francisco-based Prologis (NYSE:PLD). "E-commerce and supply chain reconfiguration continue as big drivers of demand for our product. The Class A market is where the action is."

CoStar readers were intrigued by the remarkable success of WeWork and other popular shared-office providers, with their ongoing expansions greeted by both confidence and skepticism in the long-term prospects for the concept.

Another interesting if unexpected trend in 2016 was the impact of swelling ranks of commercial real estate brokers, attracted by the recent run in sales and leasing activity. The number of commercial members with less than two years of experience nearly doubled to 9% in 2016. CoStar News shared the perspective of several experienced managers on the impact of the broker boom.

Read more and get all the links at:
http://www.costar.com/News/Article/2016-Another-Banner-Year-for-Commercial-Real-Estate/187711?rpt=1