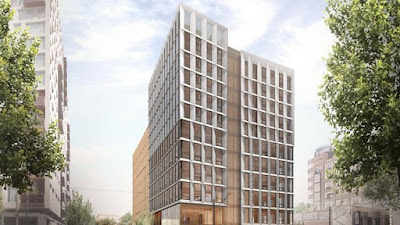 In October of this year, The Framework Project LLC successfully completed fire tests on cross-laminated timber panels demonstrating that it meets a code standard for exposed wood as building material in high-rise buildings of 75 feet or higher. If structural and seismic tests also pass, the production of cross-laminated timber for use in construction could greatly boost economies of rural timber towns.

“For people here, the idea that you can actually create these kinds of spaces, with these types of materials, is powerful, because those are the spaces that people like being in,”...“But also because in Oregon, it’s a major part of our heritage and economy.”


If a huge tree catches on fire in the forest — a Doug fir, for example — its natural properties find it charring instead of burning outright, which slows the progression of the fire.
It’s a natural concept, and one that a team in Portland has put to the test in a quest to build the first timber high-rise in the country and, along the way, help spark rural economies in Oregon and elsewhere.

This week, The Framework Project LLC, which includes Portland’s LEVER Architecture and the developer project^, among others, announced that it had successfully completed two important fire tests on the cross-laminated timber panels it plans to use in building a 12-story high-rise in the Pearl District. The tests, conducted by an independent research center in Texas, showed that a specially-designed assembly of exposed CLT and steel can withstand fire for at least two hours, a standard that meets the code for high-rise buildings of 75 feet or higher.
“What this does,” said Thomas Robinson, founder of LEVER, “is it allows us to demonstrate that you can build a high rise with exposed wood — and you can do it safely.”
The Framework project, which is planned for the corner of Northwest 10th Avenue and Glisan Street on a quarter block that is currently home to Albina Community Bank, is set to include 60 units of workforce housing along with office space for socially minded businesses.


The recent tests were made possible through a $1.5 million prize

that the team won last September in the national Tall Wood Building Prize Competition. The successful tests will move the project forward on its way to becoming what the team describes as the “first high rise with exposed wood in North America.”

Further testing of the structural and seismic soundness of the system is currently underway and expected to wrap up and be announced by early next year. If all goes as planned, the building could break ground in spring 2017.
When it does, it will do more than blaze the trail for high-rise timber construction in Portland, according to Robinson.
“For people here, the idea that you can actually create these kinds of spaces, with these types of materials, is powerful, because those are the spaces that people like being in,” he said. “But also because in Oregon, it’s a major part of our heritage and economy.”
Much of the timber used in the tests and also planned for Framework comes from DR Johnson Wood Innovations, the CLT manufacturing arm of Riddle, Oregon, wood products company DR Johnson. New uses for sustainably managed timber bodes well for rural economies in Oregon and elsewhere, Robinson said.
“There’s a groundswell of interest across the political spectrum over how this type of building can have an impact from a sustainability perspective, but also in terms of stimulating rural economic development,” he said. “That’s exciting to be a part of, and to connect what’s happening in Portland to what’s happening in Riddle, Oregon — that’s not something that’s typically connected as much as it could be. To me, that’s important.”

Looking for Real Estate in the Portland area? Contact: