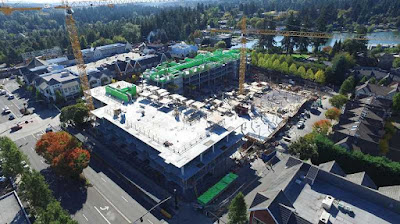 
As of September 30, 2016 concrete work for two of three buildings are now “topped out,” on the Wizer Block in downtown Lake Oswego. Now the other numerous elements of construction will begin transforming the concrete slabs into apartments and retail space.

As the green prefabricated wall panels are being installed on the fourth floors of the mixed-use development along both A Avenue and First Street, work continues on the third Wizer Block building, which is taking shape along Second Street. 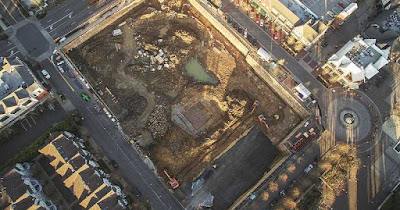 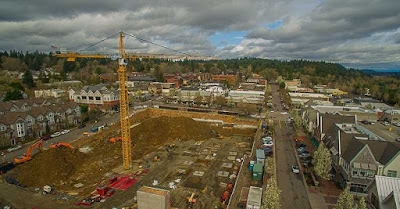 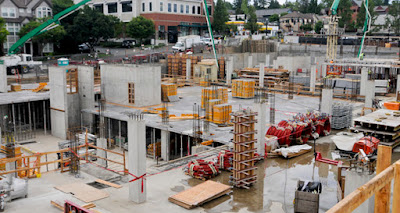 Developer Patrick Kessi says the project remains on schedule for completion in the fourth quarter of 2017.

When it is completed, the mixed-use development will include 200 residential units, almost 43,000 square feet of commercial space and parking for 430 cars, of which 135 spaces will be for public parking. Kessi says that a waiting list for the apartments now contains more than 300 names.

Since construction began in earnest last fall, The Review has been using drone photography to produce a visual record of the Wizer Block’s transformation from 1950s-era shopping center to a mixed-use development with homes, offices and shops. The latest images were taken Sept. 28.\

The Review will return monthly to the Wizer Block to record the project’s progress. Watch for the images on www.facebook.com/LakeOswegoReview, atwww.lakeoswegoreview.com and in the pages of the newspaper.

The redevelopment of Block 137, often referred to as the Wizer block, has been a high priority project for the LORA Board for a number of years. The project is included in the East End Redevelopment Plan as Project J, and as such, it is eligible for financial assistance using urban renewal funds. In early 2013, property owner Gene Wizer and his developer, Evergreen Group LLC, approached LORA for financial support for a new mixed-use development on the site. At the Board’s May meeting, Evergreen Group Principal Pat Kessi, presented a concept plan for redeveloping Block 137 that included new residential and retail development consistent with Project J in the East End Plan. Based on the proposal, the Board directed staff to negotiate a draft development agreement for the Board’s consideration.

This private development will provide a mix of uses in three separate buildings including 200 residential units, and 42,891 square feet of commercial space. A new parking garage will include parking for 430 cars, of which 135 spaces will be public parking. The City will enter into a parking management agreement with the developer to ensure the public parking is operated and managed for the benefit of the community and the retail tenants. The project also includes an east-west public walkway between First and Second streets.

OR Real Estate Disclosure Pamphlet
Posted by Karen Schaaf at 8:00 AM