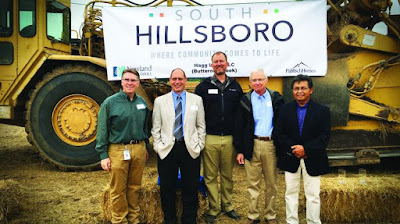 Much of the Portland area's projected growth will be absorbed in Hillsboro's massive planned development. Once built out, the city could un-seat Gresham as the 4th largest city in Oregon.


A massive new community rises up in the west

Right now, it’s 1,400 sprawling acres, land that once comprised a farm owned by Portland notables William Ladd and Simeon Reed, of Ladd’s Addition and Reed College, respectively.
But in the next 20 years, those rural acres will become home to almost an entirely new city, one with 8,000 homes, close to 300 acres of parks, two town centers and up to 20,000 people.
Welcome to South Hillsboro, a massive community that’s just started taking shape in Hillsboro near Tualatin Valley Highway and Southwest 229th and 200th avenues this summer. As it stands, it’s possibly the largest master-planned community in the history of Oregon, one that, upon its complete build-out could let Hillsboro take the No. 4 spot on the state’s list of largest cities from Gresham.


For more information about commercial property in the area, contact:
--

OR Real Estate Disclosure Pamphlet
Posted by Karen Schaaf at 8:00 AM